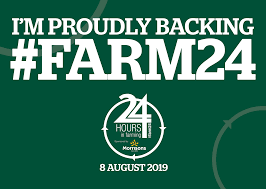 This Thursday, 8 August will see thousands of farmers across the country celebrate the UK farming industry via social media. For 24 hours #Farm24 will raise the profile of UK agriculture with support from grassroots farmers, celebrities and industry businesses and Westminster.

Now in its fifth year, the 24 Hours in Farming event presented by Farmers Guardian and Morrisons, to champion UK agriculture from farm to fork. In 2018 the campaign reached an audience of more than 114million via Twitter, was trending in the platform’s top four for more than nine hours and was supported by more than 5,000 unique contributors. Previous well-known contributors have included 10 Downing Street, chefs Tom Kerridge and James Martin, presenter Sara Cox and naturalist Chris Packham.

To get involved, simply use #Farm24 across social media channels from 5am on 8 August to 5am 9 August 2019 to show support for UK farming.

Ben Briggs, Farmers Guardian editor, said: “Last year 24 Hours in Farming was a fantastic showcase for our industry, we hope this year’s campaign will be even better and early predictions seem to suggest it will be.”