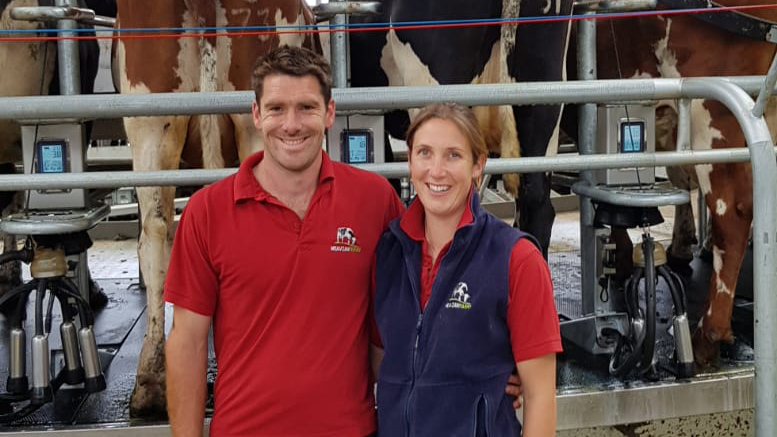 Ian and Cath Ratcliffe had a few solid goals in mind when they began their research towards building a new parlour for their Weavian Farms operation in Devon.

The couple farm in partnership at West Webbery Farm, near Bideford and wanted something that could replace their 24/48-unit Herringbone, to accommodate milking their 365 crossbred cows.

“We looked at, and had quotes, from a range of manufacturers for rotary milking parlours,” Ian said.

“We knew we wanted a rotary for speed and ease of operation, labour saving, reduced stress on cows and capability to add automation to it in the future.”

They settled on a 44-bail Centrus Composite Rotary platform, made by Waikato Milking Systems.

There were three key features which convinced the Ratcliffes to select the New Zealand company.

The first was the quality of the deck. It’s stronger but lighter than others on the market.

“This reduces stress on wearing parts so it should last longer and the deck is not corroded by peracetic acid like concrete does,” Ian said.

The deck also has rubber mats in every bail which protect the cows’ hooves during milking. The mats also make for a quieter milking environment.

The second feature the couple liked about the Waikato platforms was their plug ‘n’ play feature, for simple maintenance and allowing extra technology options to be added when needed later on in life.

The third outstanding feature was the SmartD-TECT, an optional milking automation device which can help reduce milking time.

Having the SmartD-TECT option added to their Centrus meant the Ratcliffes could operate their parlour with one person, if needed.

Cath said they decided to install a “full range” of other milking automation options available for the platform to simplify milking and make it more pleasurable and faster without compromising the cows.

The couple planned the installation of the new rotary well.

“We had an ideal site for it next to our existing parlour so we were able to use our existing collecting yard and dairy to keep the cost down,” Cath said.

The new parlour started operating in the UK spring this year. Ian and Cath said they have so far found the Centrus easy to use and maintain.

The Ratcliffes started farming in 2011, moving from Cheshire to Devon in 2013.

“At that point we doubled the size of the herd and started breeding our own replacements,” Cath said.

“We run an autumn block calving, grass based system with 365 crossbred cows (H x NR x BF, recently dropping BF) aiming to calve in 10 weeks from mid-August as the farm can dry up in the summer. “

Cath said the new rotary opens the door for future expansion of the herd and allows us to attract and retain high quality staff and hopefully in time, our sons, Josh and Freddie.

“The platform has the potential to milk a lot more cows than we currently are so is not a pinch point to expansion should opportunities for land come available,” she said. 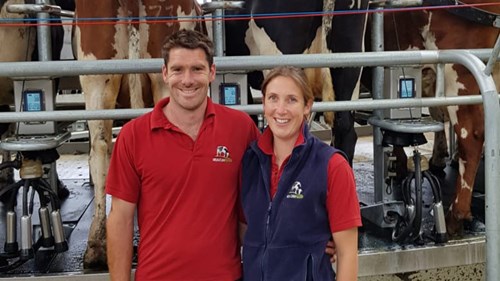 Ian and Cath Ratcliffe upgraded from a 24/48-unit herringbone to a 44-bail rotary. 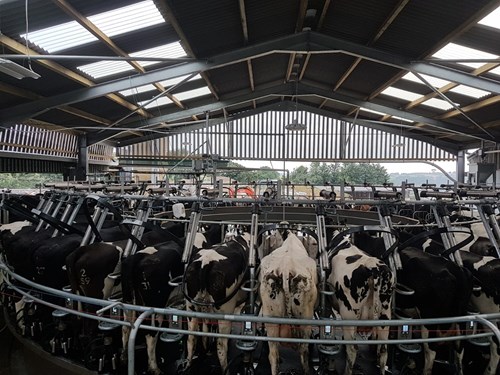